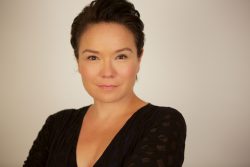 Actor and Producer Jennifer Podemski will be presented with ACTRA Toronto’s 2018 Award of Excellence in February. The ACTRA Awards in Toronto will take place on Saturday, February 24 at The Carlu. 2018 is a milestone year for ACTRA as we celebrate 75 years of defending performers and advocating for our own stories. Jennifer’s work promoting Canadian content and supporting Canadian creators is closely aligned with ACTRA Toronto’s priorities.

Ms. Podemski has been acting since she was a teen. Her career blossomed when she landed the role of Pique in The Diviners and then a starring role in Bruce McDonald’s Dance Me Outside. Of mixed First Nations and Israeli descent, she soon noticed the lack of First Nations people writing, producing and directing screened entertainment. At 25, she opened Big Soul Productions with Laura Milliken, which produced three seasons of the award-winning dramatic television series Mocassin Flats. In 2005, Podemski branched out on her own and founded Redcloud Studios Inc, an independent production company dedicated to pushing forward Indigenous narratives across all platforms. Her work as a producer also includes the paranormal documentary series The Other Side, The Indspire Awards, and the award-winning, critically acclaimed feature film Empire of Dirt for which Jennifer was nominated for a 2015 Canadian Screen Award for both supporting actress and producer. She has maintained a successful career as an actor with roles in Degrassi: TNG, The Rez (Gemini nomination), Republic of Doyle, Take This Waltz, Jimmy P., Blackstone, Sensitive Skin, FireSong, Hard Rock Medical and, most recently, Cardinal. She is currently producing and directing the documentary series Future History.

Her supporting role in Empire of Dirt garnered several award nominations including the 2014 ACTRA Award in Toronto. In 2016, ACTRA Toronto’s Women’s Committee (TAWC) presented Jennifer with the Nell Shipman Award, which honours a female producer, writer or showrunner who has advanced gender equity in the screened entertainment industry both in front of and behind the camera. In the same year, she was one of 12 women honoured with the Birks Diamond Tribute celebrating women in film.

“I am both thrilled and humbled by this recognition,” Jennifer Podemski said. “It is deeply meaningful to be honoured by my peers. I feel very privileged to have had such a long and rewarding career without ever leaving home. I always knew that the work I was meant to do had to be done here in Canada. 2018 will mark 30 years of my professional career. In 1988, I was a background performer on an ACTRA permit in the TV series 9B. That is where it all began.”

“Jennifer Podemski is such an inspiration,” says ACTRA Toronto President Theresa Tova. “Facing a paucity of decent roles for First Nations women, she grabbed the reins and started producing her own award-winning work, never an easy task. We are thrilled to honour her with our award for special achievement and a remarkable body of work.”

The ACTRA Awards in Toronto celebrates outstanding performances on screen. Three juried awards for outstanding male, female and voice performance are presented in addition to the Award of Excellence, the ACTRA Toronto Stunt Award and the members’ choice Series Ensemble Award.

ACTRA Toronto is the largest organization within ACTRA, representing more than 15,000 of Canada’s 23,000 professional performers working in recorded media. As an advocate for Canadian culture since 1943, ACTRA is a member-driven union that continues to secure rights and respect for the work of professional performers.