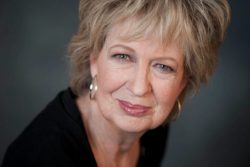 On February 23, 2019, ACTRA Toronto will present its 2019 Award of Excellence to Jayne Eastwood, a Canadian character actor with 50 years’ experience acting in film, TV, stage and voicing animation.

Eastwood’s film career started memorably in 1970 with Don Shebib’s Canadian film classic Goin’ Down the Road. She reprised the role of Betty in Down the Road Again in 2011. She has hundreds of screen titles to her credit in films such as Chicago, My Big Fat Greek Wedding and Hairspray. Her TV work is extensive with recurring roles in SCTV, two of George Walker’s series: This is Wonderland and Living in Your Car, King of Kensington, Bizarre, Billable Hours, Train 48, Little Mosque on the Prairie, Riverdale, Annedroids, Material World, Haven and in Sinking Ship’s Dino Dan and Dino Dana. In 1998 she won a Gemini award for her work in Dangerous Offender: The Marlene Moore Story. Jayne is also a busy voice actor, her distinctive voice easily recognizable in titles such as The Care Bears Movie, Scaredy Squirrel, For Better or Worse, Bob and Margaret, Jo Jo’s Circus, among others too numerous to mention. She won a Gemini award for voicing Aunt Agatha in Noddy and Friends in 1999. She won an ACTRA Award for Best Actress in 1976, the Earle Grey Award for lifetime achievement in 1999 and the Dave Broadfoot Canadian Comedy Award in 2011. She has teamed up with Kathryn Greenwood, Robin Duke and Teresa Pavlinek in Women Fully Clothed which received a 2005 nomination for a Canadian Comedy Award for best sketch troupe. She is an inspiration to her fellow Canadian performers for having crafted a successful and well-rounded career while remaining in Canada. She continues to call Ontario home saying in an interview in ACTRA Toronto’s Performers magazine (Fall 2011), “I love this damn country.”

“This is such a beautiful award because it comes from my union, my fellow actors, who I can honestly say I love,” says Jayne Eastwood. “I want to thank ACTRA for having worked so hard over many years to create a film and television industry that is a great place for us Canadian actors to work.”

ACTRA Toronto President Theresa Tova says, “Throughout her stellar career Jayne has moved effortlessly from comedy to drama, but comedy remains her magnetic north. We are grateful to Jayne for lending us her star power to lobby politicians at Queen’s Park and Parliament Hill for more Canadian content on our screens, a cause dear to Jayne’s heart. Jayne is not only an actor’s actor but also a crowd favourite who’s routinely recognized by members of the public and politicians alike. We are so proud to honour Jayne Eastwood this year.”

The ACTRA Awards in Toronto celebrates outstanding performances by its members on screen. Four juried awards for outstanding male, female, male voice and female voice will be presented this year in addition to the Award of Excellence, the ACTRA Toronto Stunt Award and the members’ choice Series Ensemble Award.

ACTRA Toronto is the largest organization within ACTRA, representing more than 15,000 of Canada’s 23,000 professional performers working in recorded media. As an advocate for Canadian culture since 1943, ACTRA is a member-driven union that continues to secure rights and respect for the work of professional performers.