The Diversity in Voice Initiative is open to members of the Diversity & Inclusion and outACTRAto Committees.

The goal of the Diversity in Voice program is to provide vocal performance training to performers from underrepresented communities. The ACTRA Toronto Diversity & Inclusion Committee and the ACTRA Toronto Voice Committee developed this initiative to grow the talent pool of skilled diverse voice performers by providing vocal coaching for ACTRA Toronto members who identify as Black, Indigenous or people of colour. Following the success of the three previous Commercial VO & Vocal Health courses, as well as the Animation Workshop, members can register now for the next round of training for commercial voice and vocal health performance! This weekend course will provide training on Commercial Voice-Over & Vocal Health with vocal instructors Alicia Richardson and Tracey Hoyt. The course will take place via Zoom and 10 members will be chosen to take part.

Performers will get a total of 4 hours of instruction over two session dates. The registration fee is $75.00*. To be eligible for the program, applicants must complete and submit the Application Form below by 5 PM on Friday, October 8, 2021.

*Members experiencing financial hardship who require assistance with the registration fee are encouraged to reach out to ACTRA Toronto.

Please note, applicants must be ACTRA Toronto members (Full Member, Apprentice or AABP) in good standing and be available for both sessions.

To apply for the Autumn 2021 Commercial VO & Vocal Health Workshop, click the button below. 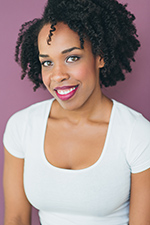 ALICIA RICHARDSON is an actor/writer, and vocal coach from Boynton Beach, Florida. She graduated from York University’s MFA Acting & Diploma of Voice Teaching Programs. Now a Permanent Resident of Canada, Alicia calls Toronto her home. Her body of work spans television, film, theatre, and voice-over. Recent acting credits include: Private Eyes (Global), Ready or Not (Fox Searchlight), and American Woman (CBC Films/ Telefilm Canada). As a voice and dialect coach, Alicia has worked for The Shaw Festival (Trouble in Mind), Soulpepper Theatre Company (Ma Rainey’s Black Bottom, The Brother’s Size, Jesus Hopped the A Train), and as a member of faculty at Sheridan College since 2016. Recent writing credits: #WINNING (short), The Memory Surgeon (short: official selection for Pinewood Studio’s Lift Off Sessions July 2020), Sweeter (as Playwright-in-Residence of Young People’s Theatre), and Solve for X (as Playwright-in-Residence of The Driftwood Theatre Group). Follow her adventures on social: @leesheelovesyouind

TRACEY HOYT has been a working actor in theatre, film, TV since 1987, specializing as a voice artist in Commercials, Animation, Narration, Audiobooks and Videogames. A Toronto-based audition coach since 1998, Tracey taught Improvisation at The Second City Training Centre for 8 years, specializing in Character and Monologue training. In 2007, she created Pirate Voice, under the mentorship of Pirate Toronto founding partner Terry O’Reilly. This commercial voice-over training and demo reel production service ran until early 2016. Now re-branded as TraceyHoyt Coaching & Direction, she specializes in preparing and directing voice talent for their Commercial demo reels. Tracey has had 3 productions of her fully improvised solo show: Face Value: Leslieville (Crow’s Theatre), Face Value: West (SummerWorks, NOW Magazine Artist to Watch) and Soul Prints (ConvergenceTheatre). In 2019, she won the Cayle Chernin Theatre Development Award for her play Hospital Hotel, now called The Shivers. She can currently be seen as Barb in the CBC Gem mockumentary web series Decoys. Recently, Tracey narrated the audiobook version of Canadarm and Collaboration: How Canada’s Astronauts and Space Robots Explore New Worlds by Elizabeth Howell for ECW Press. www.traceyhoyt.com
© 2022 ACTRA. All rights are reserved and contents, in whole or in part may not be reprinted without permission. The points of view expressed do not necessarily represent those of ACTRA.