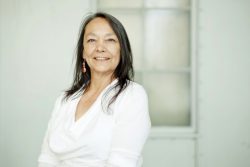 Tantoo Cardinal will be presented with ACTRA Toronto’s Award of Excellence at the 2015 ACTRA Awards in Toronto gala on February 20, 2015 at the Carlu.

Ms. Cardinal was born in Ft. McMurray, Alberta and has worked steadily in film and television on both sides of the border for over 40 years, appearing in over 100 film and television projects. She is known for Blackstone; Dances with Wolves; Black Robe; Dr. Quinn, Medicine Woman; North of 60; Legends of the Fall and Loyalties. She has won numerous awards for her performances: A Gemini for North of 60, a First Americans in the Arts Awards for The Education of Little Tree, an American Indian Film Festival Best Actress Award for Where the Rivers Flow North, a Women in Film Award (Vancouver International Film Festival) for Mothers & Daughters, a Leo Award for Blackstone, and she shares a Best Ensemble Cast Award (Philadelphia FirstGlance Film Festival) for Shouting Secrets. She was nominated for a Genie for Loyalties.

Ms. Cardinal is a Member of the Order of Canada (2009). She holds an Eagle Spirit Award from San Francisco’s American Indian Film Festival, the first Rudy Martin Award for Outstanding Achievement by a Native American in Film, an Outstanding Achievement Award from Women in Film and Television (Toronto), Harvard’s Sun Hill Award for Excellence in Native American Filmmaking, the Peter Ustinov Award from the Banff Film Festival, and a National Aboriginal Achievement Award. She was honoured by ACTRA National’s Women’s Committee on the 100th Anniversary of International Women’s Day. She won a Sterling Award for her stage work in All My Relations and is a co-contributor to the book Our Story: Aboriginal Voices on Canada’s Past. She is the recipient of four honourary degrees.

Ms. Cardinal’s passionate activism on behalf of Aboriginal people and culture is felt in her performances. She has been quoted as saying that she has had to argue for a more realistic portrayal of the characters she has played. In 2011, she was arrested with other actors protesting the proposed extension of the Keystone Pipeline which would pass through native land.

Dave Sparrow, President of ACTRA Toronto, lauds Ms. Cardinal, “Tantoo’s generosity with her time and wisdom has made her an inspiration to Aboriginal people and her fellow performers alike. Her work celebrates Canada, entertains the world and challenges us all to raise our standards for respect and inclusion.”

The annual ACTRA Awards in Toronto recognize outstanding performances by ACTRA Toronto members and celebrate accomplishment and excellence in our industry. Three juried awards will be presented in addition to the Award of Excellence: the ACTRA Awards for Outstanding Performance: Female, Male, and Voice.

ACTRA Toronto is the largest organization within ACTRA, representing over 15,000 of Canada’s 22,000 professional performers working in the English-language recorded media in Canada.  As an advocate for Canadian culture since 1943, ACTRA is a member-driven union that continues to secure rights and respect for the work of professional performers.