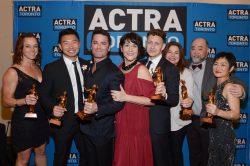 Toronto, ON – February 25, 2017 – The 15th Annual ACTRA Awards in Toronto were presented at a live show and gala tonight at The Carlu. The show was hosted by Aurora Browne, Carolyn Taylor and Jennifer Whalen from the Baroness Von Sketch troupe with live music by the 11-piece Wintergarten Orchestra with singer and actor Ted Atherton. The evening sported a theme to honour Canada’s sesquicentennial celebrations.

The newly-elected President of ACTRA Toronto Theresa Tova said, “Canada has been reflected by ACTRA’s professional performers for fully half of Canada’s 150-year history. Linda Kash, Joey Klein, Jean Yoon, Yannick Bisson, Joel Harris and Kim’s Convenience, and all the nominees, personify the extraordinary talent of our professional acting community.”

ACTRA Toronto is the largest organization within ACTRA, representing more than 15,000 of Canada’s 23,000 professional performers working in recorded media in Canada. As an advocate for Canadian culture since 1943, ACTRA is a member-driven union that continues to secure rights and respect for the work of professional performers.