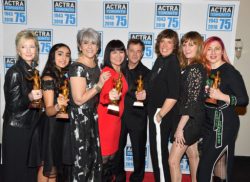 ACTRA Toronto is proud to announce the winners of the 16th Annual ACTRA Awards in Toronto.

The Stunt Community presented a video of stunt performance highlights as part of the 75th anniversary celebration.

President Tova spoke of the need for all entertainment industry stakeholders to press on with their collaborative work to make the industry a safer place. “We have a window of opportunity to look deeply within ourselves as an industry, to make restitution for past offenses, and affect real cultural change so we can simply behave better with each other,” she said. “…We cannot go back to the way things were.”

ACTRA Toronto is the largest organization within ACTRA, representing more than 15,000 of Canada’s 23,000 professional performers working in recorded media in Canada. As an advocate for Canadian culture since 1943, ACTRA is a member-driven union that continues to secure rights and respect for the work of professional performers.