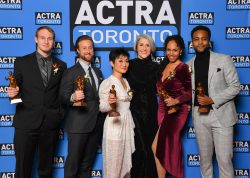 Toronto, ON – February 22, 2020 – ACTRA Toronto is proud to announce the winners of the 18th Annual ACTRA Awards in Toronto.

Bryn McAuley as Mavis in Hotel Transylvania: The Series, “Portrait of Mavis as a Young Vampire” (Corus Entertainment)

Cara Ricketts as Mary Handford-Lacroix in Anne with an E, “What Can Stop the Determined Heart” (Northwood Entertainment)

Dalmar Abuzeid as Sebastian ‘Bash’ Lacroix in Anne with an E, “What Can Stop the Determined Heart” (Northwood Entertainment)

The 18th Annual ACTRA Awards in Toronto were presented at a live show and gala tonight at The Carlu. DJ Salazar Solomon performed the show together with saxophonist Geoff Bournes and trumpeter Howard Leathers. The show was written by David Gale and Diane Flacks and directed by David Gale.

“We are so proud to shine a spotlight on the work of our homegrown talent, from Anne with an E to Hotel Transylvania and Schitt’s Creek while celebrating with our allies and industry partners,” says President Theresa Tova. “Look at what we have accomplished together! We’re looking at the ninth year of sustained growth in our industry. From TV and film to animation and video games, Ontario creators and Ontario performers are making names for themselves around the world.”

ACTRA Toronto is the largest organization within ACTRA, representing more than 15,000 of Canada’s 25,000 professional performers working in recorded media in Canada. As an advocate for Canadian culture since 1943, ACTRA is a member-driven union that continues to secure rights and respect for the work of professional performers.

© 2021 ACTRA. All rights are reserved and contents, in whole or in part may not be reprinted without permission. The points of view expressed do not necessarily represent those of ACTRA.