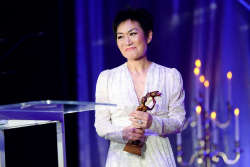 December 5, 2019 – On February 22, 2020, ACTRA Toronto will present its 2020 Award of Excellence to Jean Yoon, who plays Umma on the international hit sitcom, Kim’s Convenience.

Jean Yoon is a playwright, actor, advocate and mom. Born in Illinois and raised in Toronto, Jean has lived and worked in Vancouver, Edmonton, Harbin City and Yanji City in North-Eastern China and makes her home in Toronto.

Jean began her theatre career in the early 1980s in Toronto, performing with Upstage Theatre, Toronto Free Theatre and Canasian Artists Group. In the 1990s, Jean was active as a cultural equity advocate and new play producer. She was Cross-Cultural Coordinator for Theatre Ontario 1991/92 and produced Theatre Ontario’s forum Breaking Ground at the end of her term. She went on to serve as Co-Artistic Director of Cahoots Theatre Projects 1992 to early 1994, founding Lift Off! and cementing Cahoots’ role as a leader in new play development for playwrights of diverse cultures. She continued to advocate for equity while serving on the Second Advisory on Racial Equality to Canada Council for the Arts 1993-1996, and as Vice President of PACT in 1993/94.

Jean’s playwriting credits include the Dora-nominated stage play, The Yoko Ono Project, a multimedia performance art comedy, produced by Loud Mouth Asian Babes and Theatre Passe Muraille in Toronto, January 2000. Her comedic adaptation of a classic Korean folktale Hongbu & Nolbu: The Tale of the Magic Pumpkins premiered at Young Peoples Theatre in 2005 and was published in Seven Contemporary Plays from the Korean Diaspora in the Americas, edited by Esther Kim Lee, Duke University Press in 2012. Other playwriting credits include Sliding for Home, Spite, and Yes Yoko Solo.

Jean is best known for her work on the CBC/Netflix television adaptation of Kim’s Convenience, for which she received the ACTRA Award for Outstanding Performance Female 2017 and two CSA nominations. Other screen credits include Dragon Boys for which she received a Gemini nomination 2007, Orphan Black, The Expanse, Save Me and the voice of Connie in the Emmy Award-winning PBS show Peg + Cat.

One of our community’s groundbreaking inclusion advocates, Jean participated in Into the Mainstream’s Representation in the Media Conference in 1994. She addressed the CRTC on behalf of ACTRA in 2016 to argue that private TV broadcast licences should continue to be tied to a commitment to Canadian programming. Most recently, Jean served as an ACTRA Toronto Councillor from 2018 to 2019.

“I am grateful to have begun my career at a time when actors and artists like Sandi Ross, Brenda Kamino, Beverly Yhap, Rita Deverell, Walter Borden and so many others had already done so much of the hard work so that someone like me could find a way, a place, a community to create, grow and voice our stories,” says Ms. Yoon. “Telling our own stories shouldn’t be a radical endeavour. But it still so often is. The key is not to fight each other over one small slice of pie; we just have to bake more damn pies.”

“Jean Yoon is an artist Canadians should celebrate!” says ACTRA Toronto President Theresa Tova. “Diversity is our strength, and Jean’s international success is a testament to the importance of how universal all our stories are. Never shy to call out inequity, Jean’s voice has given hope to a generation of diverse performers, and in her time on ACTRA Toronto Council she has motivated our leadership to actively fight for inclusion, diversity and real representation on our screens. Brava Umma!”

The ACTRA Awards in Toronto celebrate outstanding performances by its members on screen. The luxe gala event will be held on February 22, 2020, at The Carlu and features a show, followed by a dance party. The ACTRA Toronto Award of Excellence honours an ACTRA Toronto performer with a significant body of work and who has demonstrated a commitment to advocacy on behalf of their fellow performers. Four juried awards will be presented during the show for outstanding male, female, male voice and female voice, as well as the ACTRA Toronto Stunt Award and the members’ choice Series Ensemble Award. The awards gala is ACTRA Toronto’s way of celebrating a year-over-year successful industry with their producing partners, generous sponsors and allies.

ACTRA Toronto is the largest organization within ACTRA, representing over 15,000 of Canada’s 25,000 professional performers working in recorded media in Canada. As an advocate for Canadian culture since 1943, ACTRA is a member-driven union that continues to secure rights and respect for the work of professional performers.